Wow, today was the best day yet on this trip.  I know I’ve said that before, but today was a lot of fun.   I enjoyed it more than any day yet on this epic adventure.  And like the title says, we’re in Boise, Idaho tonight.   It was a good ride getting here.

I just came in from changing the oil (we did all of the bikes today).   Hugo and John G have group oil changes down to a science.  We serviced 10 bikes in about an hour.   Fun times. Lots of jokes, lots of kidding around, and just plain fun.  Hugo is turning into a real boss.   John G thinks he’s running the show.   Hugo does, too.   It’s pretty funny watching Hugo holding a funnel, pointing to his wrist, and telling John “quickly, quickly” (especially when you consider that Hugo doesn’t wear a watch).   Good times.

We rolled out of Twin Falls at around 8:00 a.m., picked up Highway 20, and rode it through the southern width of Idaho.   Arizona George met us along the way…he’s a Brit with an accent that everyone mistakes for Australian, and we’re really enjoying his company. 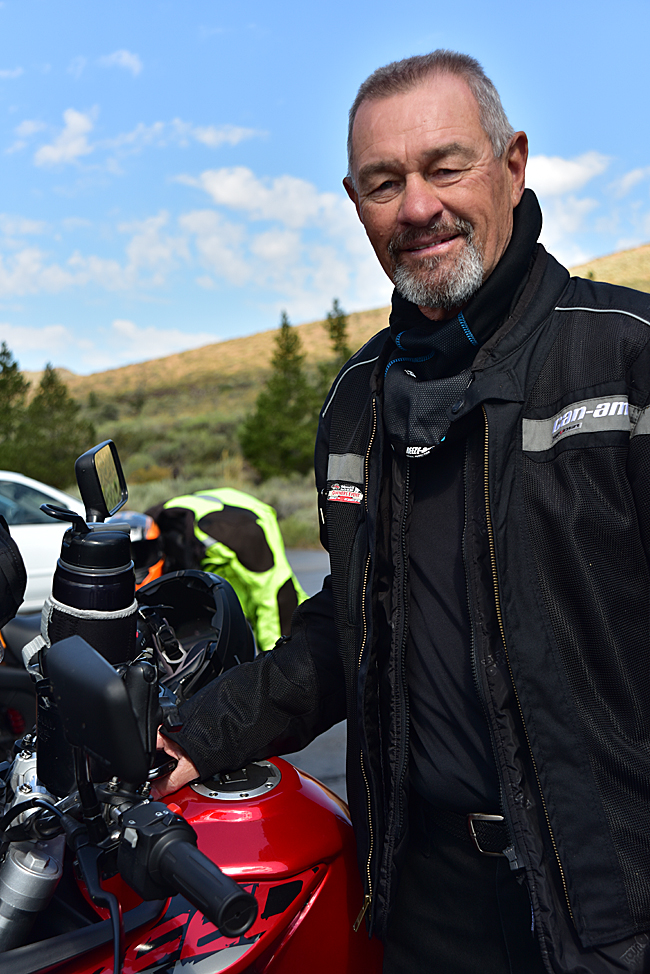 Our first stop was at the Craters of the Moon National Monument.  It’s a volcanic field in the middle of southern Idaho’s gently rolling hills, and it’s definitely other-worldly.

I grabbed a photo of Kyle, John, and Gabriel when we got there… 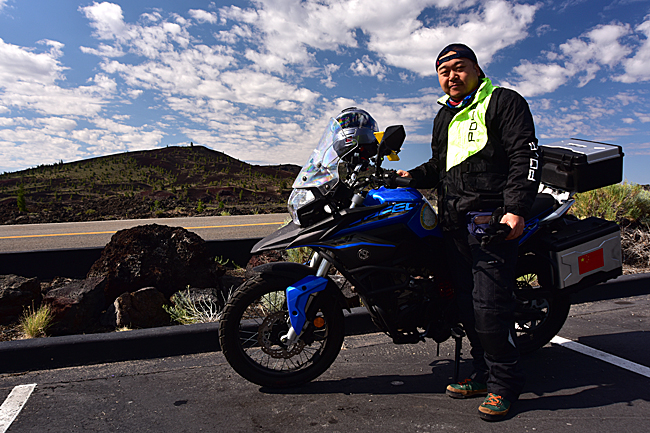 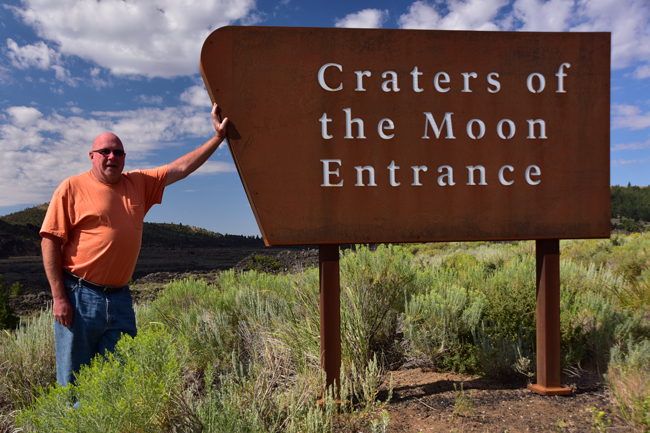 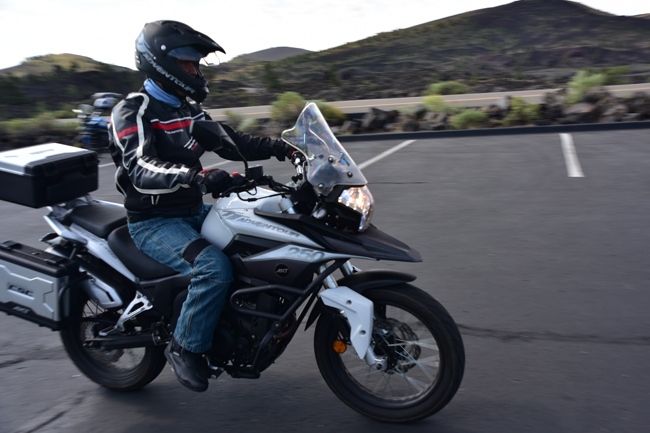 You know, you get to think a lot when you ride a motorcycle.   I like things simple.   I don’t have a GPS, or an intercom, or anything else like that on my bike.   I like the solitude that riding a motorcycle offers, even when I’m riding in a group.   I’m old, I guess, and I find that feeling (a preference for solitude) is more prevalent among older riders.

I sometimes like having a GPS in my car, but only sometimes.   To me, using it is like looking at a map through a straw.   I like the big picture, and I like having a paper map.  I don’t want a GPS on my bike.  Personal preference, I suppose.  When I first starting taking big rides on motorcycles, we used maps.  I still like the feel of a map.

The guys were riding much better today.  We were getting a little too bunched up yesterday, so we had another safety meeting and today things were much better.   I think a big part of it is cultural…in other countries riders ride closer together.  I like big distances with lots of space between bikes.  It gives you more time to react.   Anyway, today was a breeze.   I think my new Chinese name is SesherMe, which the guys tell me means 30 meters in Chinese.   I’m always telling the guys to keep 30 meters between bikes.

The mornings are interesting.   We usually have breakfast in the hotel and then get on the road by about 8:00.  It’s a challenge to get everybody moving at the same time, and Hugo is helping a lot with this.   We’re doing well.

Most of the guys from China have never been to the US before, and it’s sometimes hard for me to remember that the things I see all the time and don’t take much notice of are new and exciting for our guests.   My focus has been on getting everybody moving at the same time and minimizing the time at our fuel stops, because I want to get to the next spot before dark and still have enough time to take in the sightseeing stops we have scheduled.   The Chinese guys want to see it all and get photos of everything.   I was the same way when I was in China.

Today was interesting for many reasons, but what happened in Carey, Idaho, will stay with me for a long time.

We had left the Craters of the Moon and ridden another 50 miles or so (with literally nothing in between except open plains, rolling hills, and beautiful scenery) when we entered Carey.   You have to understand that Carey is basically a wide spot in the road with maybe 40 or 50 buildings along the way.   I was focused on getting there, filling the bikes, and getting back on the road.  Little did I know…

When we pulled into Carey, it was like my home town in the early afternoon on the 4th of July….you know, where everybody is sitting in lawn chairs, lining the street, waving American flags, and waiting for the parade.  That’s literally what we encounted.   The good citizens of Carey were waiting for the parade.   It was Pioneer Day here in Idaho.  I imagine everybody in town was out there on both sides of the street.

Okay, so we roll into town on our RX3s.  All 11 of us, now that Arizona George had joined the party.   You can guess where this is going…the good people of Carey thought we were the start of the parade, especially since the Chinese have large American and Chinese flag decals on their windshields.   The Carey people waved their flags at us and cheered.   What the Chinese guys were thinking I can only guess.   When we pulled in the Shell station, my good buddy Joe Gresh (who is a really fun guy to be around) pulled off his helmet and said “Boy, a lot of folks are following the blog.”  It was pretty funny.

I wanted to get gas and get going.  The Chinese guys and the Colombians wanted to stay and watch the parade.

You can guess how it went from the photos below… 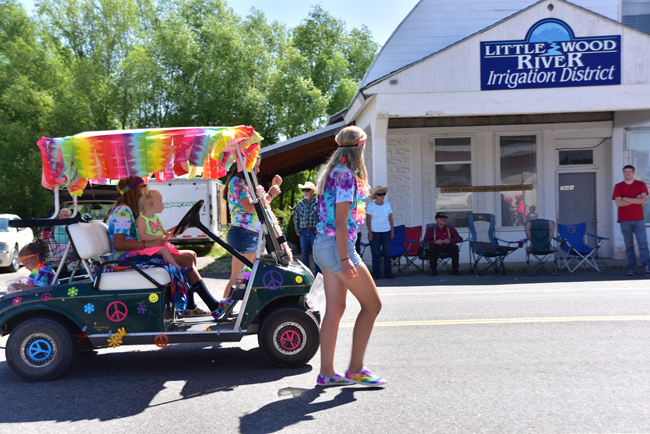 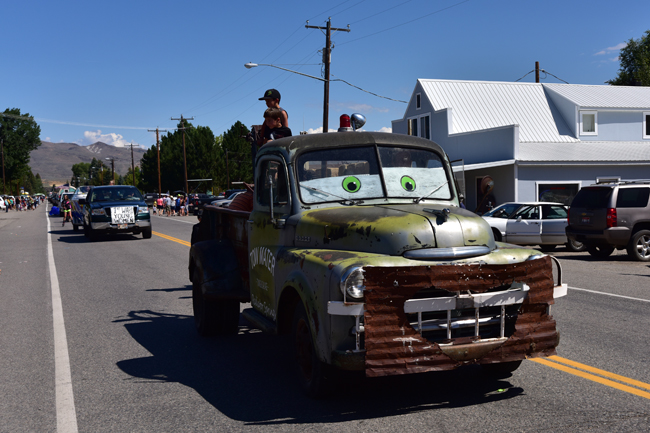 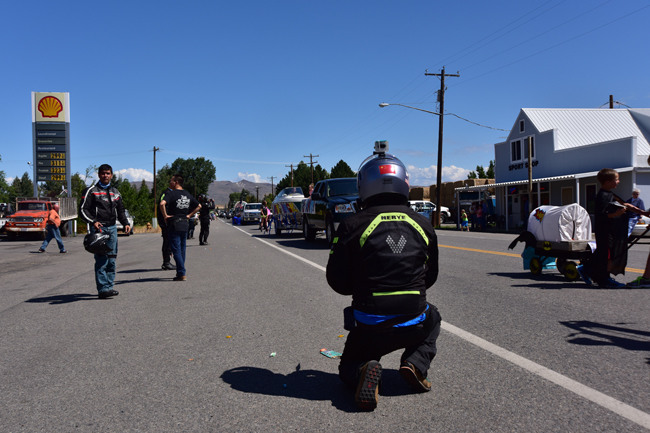 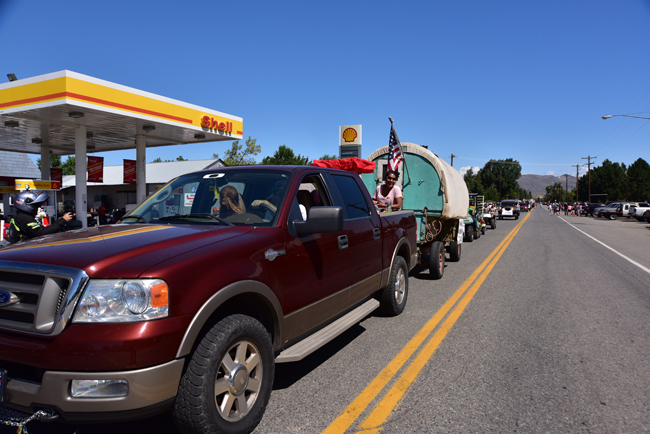 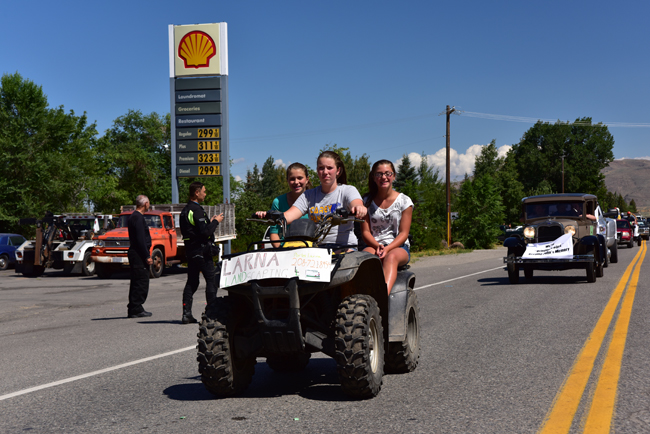 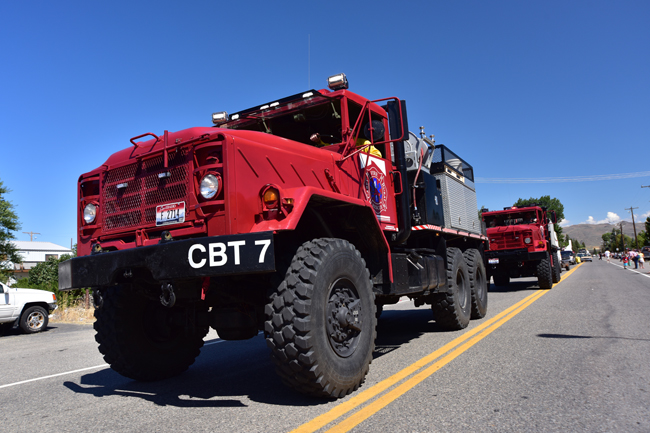 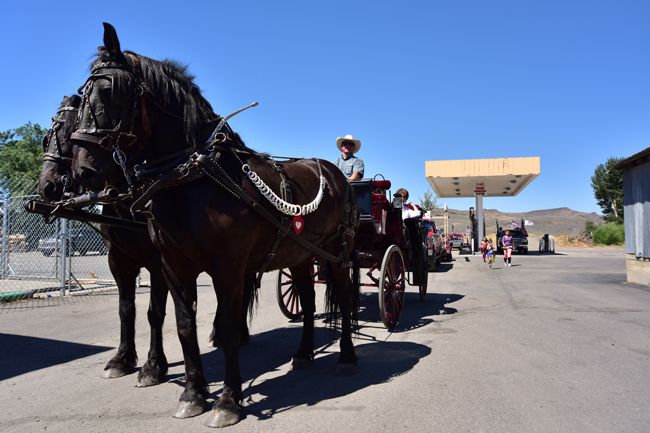 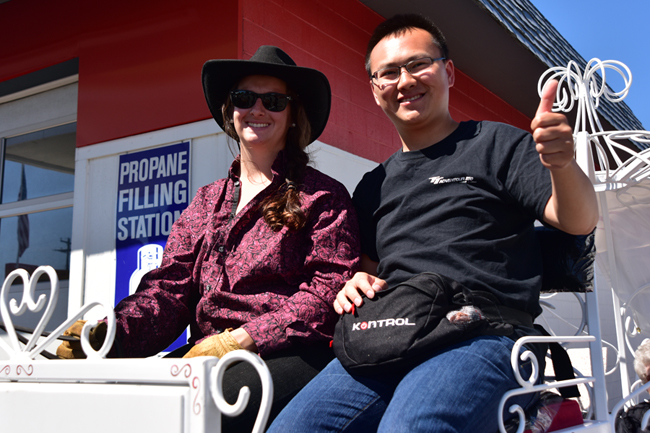 We actually had a pretty good time. Our visitors were seeing a good old fashioned American parade. You can imagine the stories and photos they’ll be bringing home.

After the parade, we rode another 50 miles or so to another tiny town with two small restaurants, and we picked one. Hugo and I have this system worked out we were get in first (before all of the other guys, we review the menu, and we pick out something that is reasonably priced and order the same thing for all of the Chinese visitors).    Then I explain to the waitress what’s happening.  It’s working pretty well.

Today, we opted for bacon cheeseburgers, and they were awesome.  It’s always fun to watch the reactions when the food comes out.  The Chinese can’t believe our portion sizes.

The other thing that’s fun is to watch the reactions of the other diners in these places.  We’re eating in local restaurants, and the other patrons are local folks.   Today I walked over to the other tables and told them what was happening (you know, new motorcycle in America, visitors from China and Colombia, etc.).   The locals loved it.  They had lots of questions and it was a very enjoyable exchange.  Some of the towns we are going through are extremely small (for instance, the town of Emblem has a population of 10), and it’s a big deal for them (much as it is for us) when we stop in for a meal.   Fun times.

At our stop today for lunch, it was an extra-special treat to have Justin (aka MacGuyver) hook up with us for the ride.   Justin, you will remember, rode with us on the Baja ride.  It was another photo op.  Grand fun, all the way around, for everybody.  That’s Justin in the middle of the photo below. 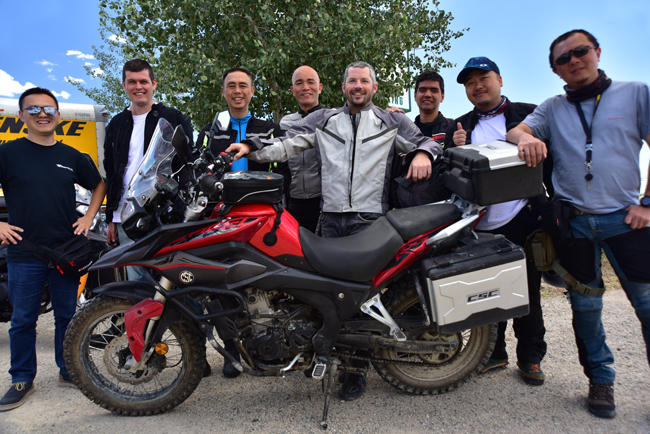 From there, it was another quick 50 miles (although in much more severe heat) to the junction of Hwy 20 and I-84.   We stopped for gas, but on the way into that town, several of us noticed an M1 Abrams tank on display.  Joe Gresh wanted to take a few minutes to photograph it.   So did our guests.   It was a hoot. 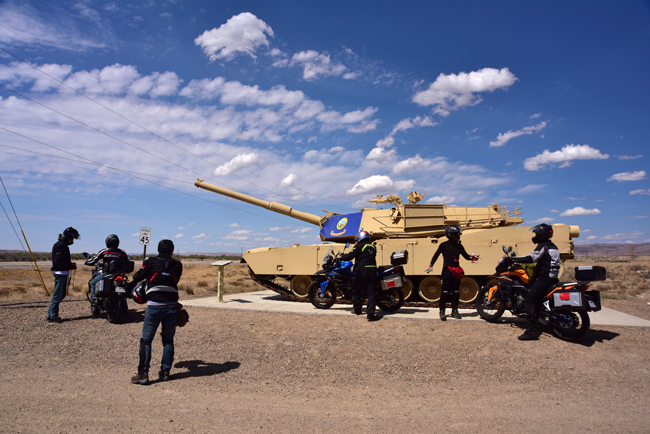 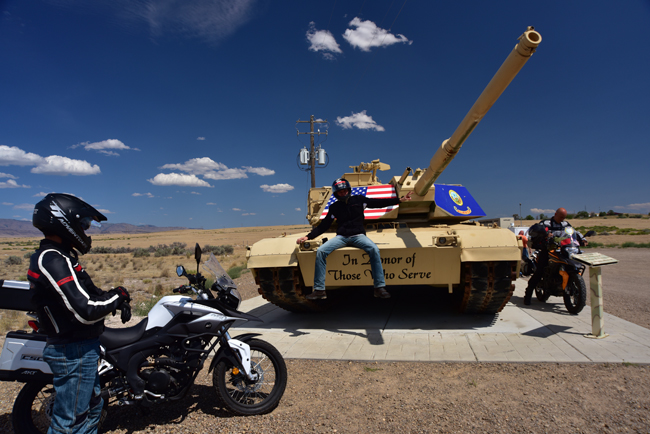 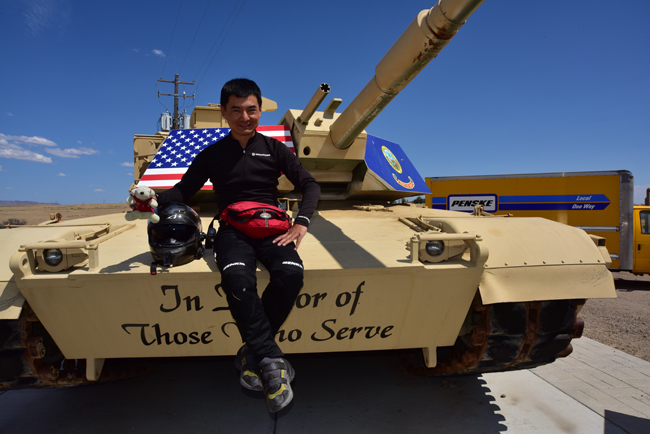 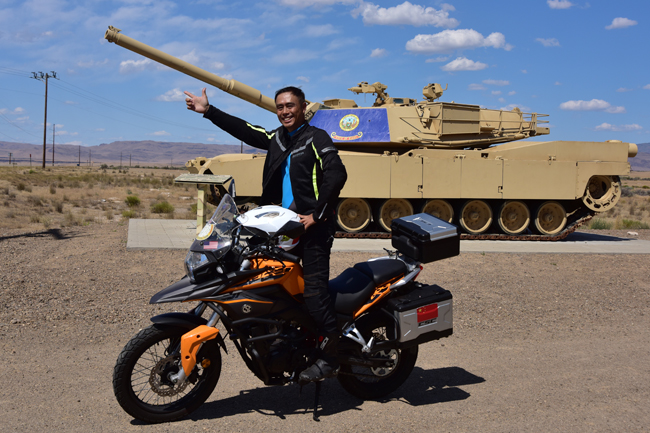 We’re in Boise tonight, and when we arrived at the hotel, we had another nice surprise.  My old Triumph-riding buddy Brendan and his brother, Shelby, were waiting for us at the hotel.   They both ride RX3 motorcycles now.   They are joining the ride tomorrow, so we now have four additional RX3 riders in our group.

Today we’re headed to Hell’s Canyon in Oregon.  Yep, we’re adding another state to our list.  It’s going to be hot, but it’s going to be fun.  I washed clothes last night and they are still a bit damp.  That will keep me cool for awhile.

This evening we’ll be staying at the Super 8 on 2407 East R Avenue in LaGrande, Oregon.   Ride safe and we hope to see you there.