Whoa, there’s so much going on it’s tough (and fun) keeping up with it.   First, a nice email from our good buddy Oregon John…

Just a quick note from Oregon. Took the “new” RX-3 out on a true test run after I got 400 initial miles on it and changed up the oil. Yesterday was an epic adventure. Left Eugene Oregon at 9:00am. 70 degrees out. Rode the bike east to the summit of Highway 242, a seasonal twisty curvy route through lava beds and the scenic Cascade Mountains. I stopped on top of the pass at 5325 feet.

I continued to the town of Sisters then south on USFS Road 16, up into the mountains to Three Creeks Basin then south on 23 miles of off camber rough double track. In the meantime a series of thunder storms blew in and increased the route difficulty for me by about double.

The RX-3 performed very well as this was my first off road with it. Solid bike with enough power to get me through a few tight spots and keep the rubber side down. I finished off the double track at Todd Lake, continued on pavement south to Oregon Highway 58 and back home to Eugene, 5:00 p.m. and 303 miles later. That’s a pretty amazing little bike and the questions I have had for the folks at CSC have been answered quickly and correctly.

Thanks, guys and gals!

John, thank you for being a great customer and for taking the time to send us a note.  We’ll be rolling through Oregon on the CSC Western States run later this month, and we sure hope you’ll be able to ride a bit with us!

And guess what!  We had another nice note this morning from our good buddy Bar Harbor Bob…

Thought you guys might be amused by this.  Remember the BMW ads for the 1200GS with it being pulled across a lake on a raft by a rowboat? Well later in that ad they show the 1200GS parked off the road on a mountain. I recognized the location and took a similar shot but with the RX3 in it. 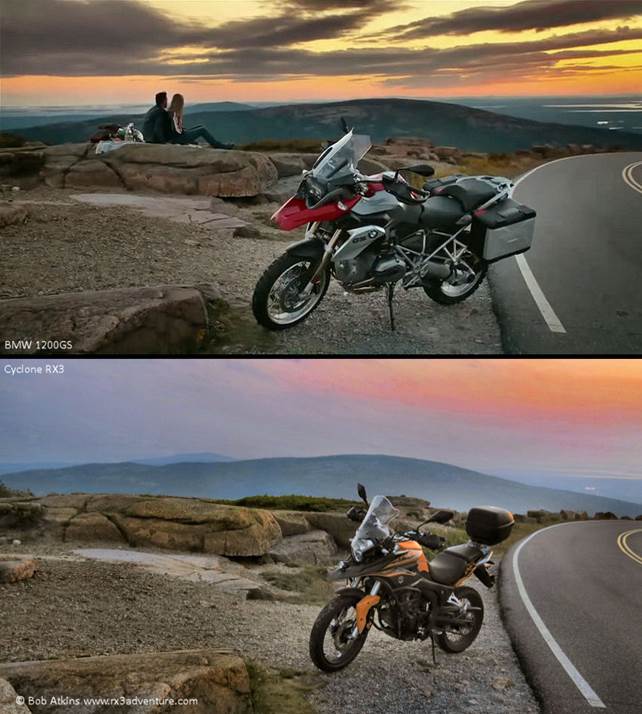 Bob, thank you for taking the time to write to us, and for staging that photo!  It’s awesome.   And for those of you who don’t know it, Bob manages the excellent RX3 site, http://www.rx3adventure.com.   Bob’s site is factual, it’s good, and Bob knows his stuff.   Bob’s site and thewww.ChinaRiders.net that Spud (and WeldandGrind) run are the ones I follow.

Speaking of folks from other countries, my friends, the excitement has already started.   We picked up my good buddy Hugo as well as several of the Chinese riders at LAX last night, and today we ran out to LAX again to get Juan Carlos and Gabriel from Colombia.

Hugo was the first to arrive, and Steve, Baja John, and I took Hugo to a cool Italian restaurant in Playa del Rey.   Hugo was immediately taken in by some of the iron parked in front of the restaurant…

The excitement around here is real, and even though we got home at 1:30 last night, I’m not tired at all.   The Chinese guys had a 30-hour journey to get here, and they were raring to go last night.   Their first request?   “Could we go to In-N-Out?”  Hey, it’s our pleasure!  After meeting everyone at the LAX Tom Bradley International Terminal, we rolled into the world’s finest hamburger restaurant at around midnight, and stood in a long line for our second dinner of the evening… 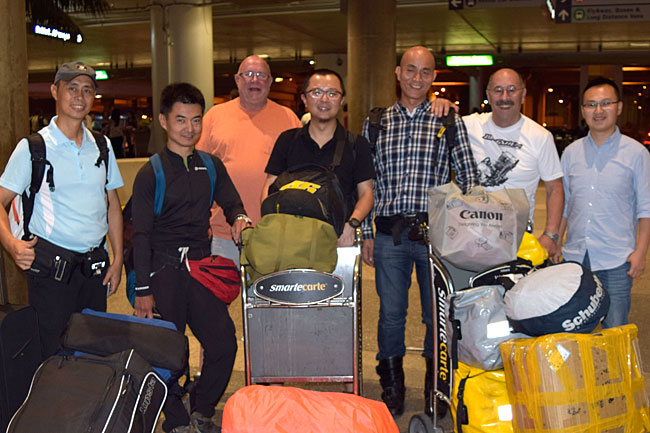 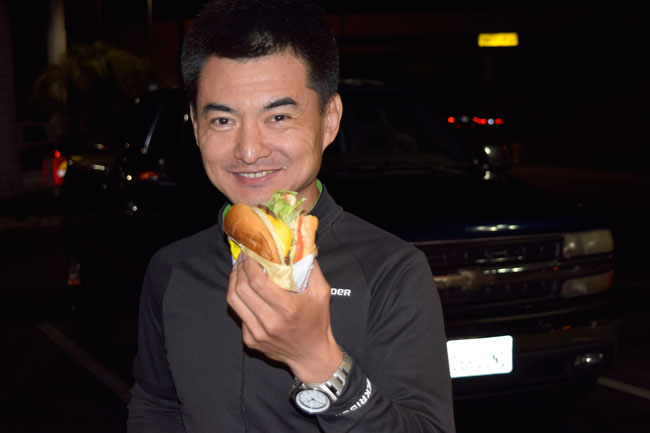 Today, it was a quick run back to LAX to pick up Gabriel and Juan Carlos, our riders from Colombia… 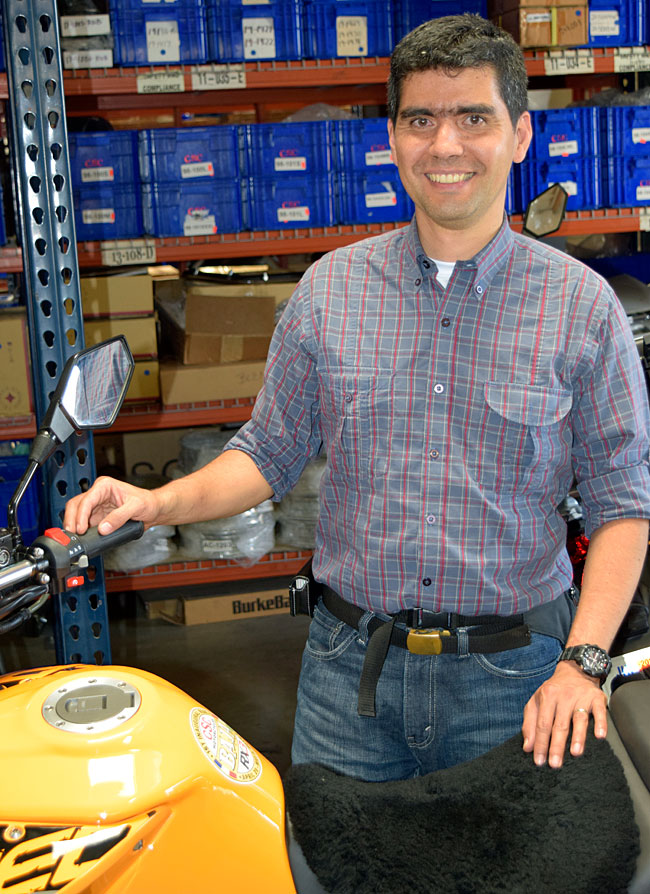 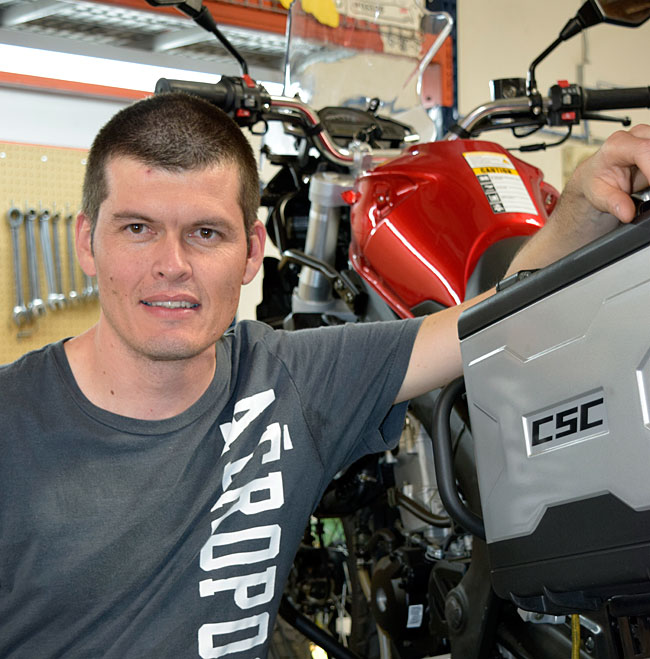 That’s almost it for now, folks.  I asked Hugo if he wanted Chinese food this evening, and it seems that somehow became a plan for a fine Mexican dinner at La Tolteca.    That works for me; I love that place.

Tomorrow we’re headed up to Glendora Ridge Road for photo ops and a few break-in miles on the new RX3s for our guest riders, and then early Wednesday morning we’re in the wind for our Western US grand adventure ride.   Watch the blog for more details on where we’ll be and when we’ll be there.  We’d like to see all of you on this ride, and if you want to test ride the RX3 when we’re in your area, this is your opportunity to do so.

You can follow our adventure run right here on the CSC blog, and we’ll also be posting updates on our CSC Facebook page.   If you would like to learn more about the RX3, be sure to check out our awesome CSC website, too!