If a picture is worth a thousand words, the one above says it all.   That’s Zuo, just after we crossed the Snake River from Idaho into Oregon.

Let me back up a bit and tell you about this fine day in July.   We were up early and we rolled out of, let’s see, where were we last night?  Oh yeah, Boise.

So we rolled out of Boise on the freeway for a bit, we grabbed 95 north (a nice country road), and then we met Rob (yet another RX3 rider) in Cambridge, Idaho.

First, a shot or two or three of Cambridge… 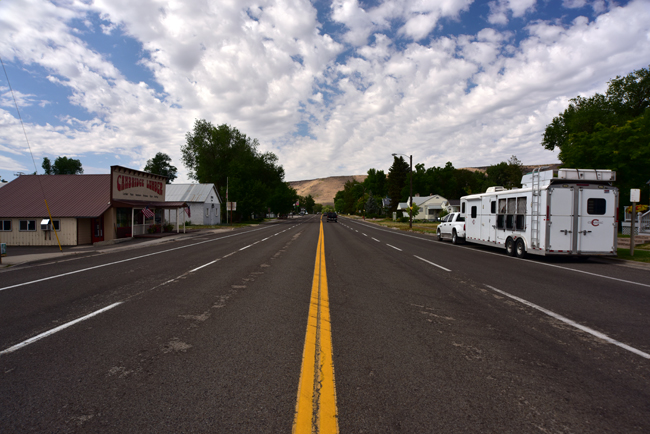 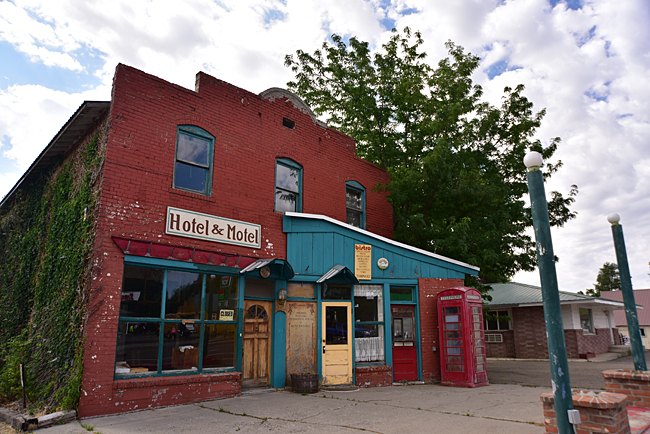 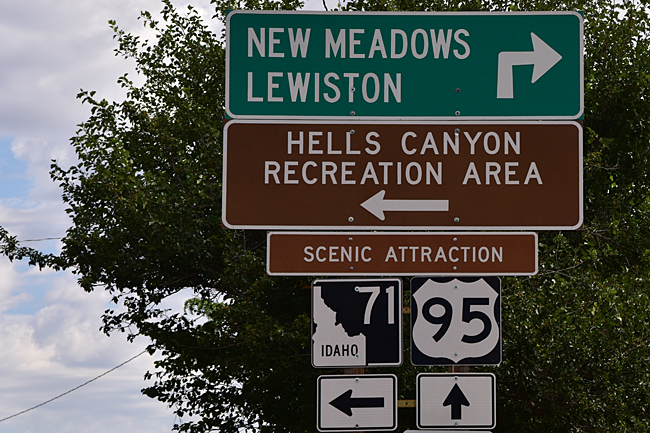 We were taking Idaho 71 through the hills to the Snake River, but allow me to introduce our good buddy Rob first… 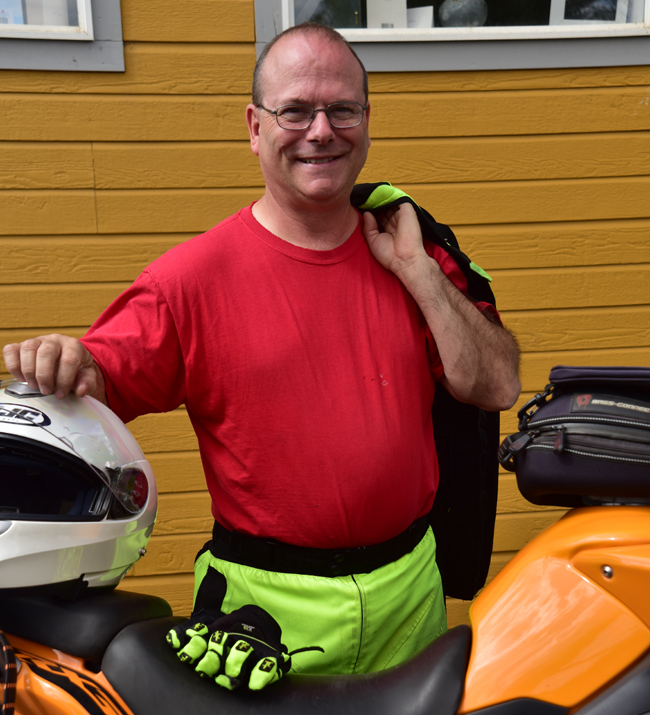 Rob’s a cool guy and a master craftsman.   He and I had corresponded on the ChinaRiders.net forum, and I was glad I finally got to meet him in person.   I knew Rob would be an intelligent man from his postings on ChinaRiders, and I had been looking forward to meeting him today.

Rob had some nice touches on his RX3, including his mascot… 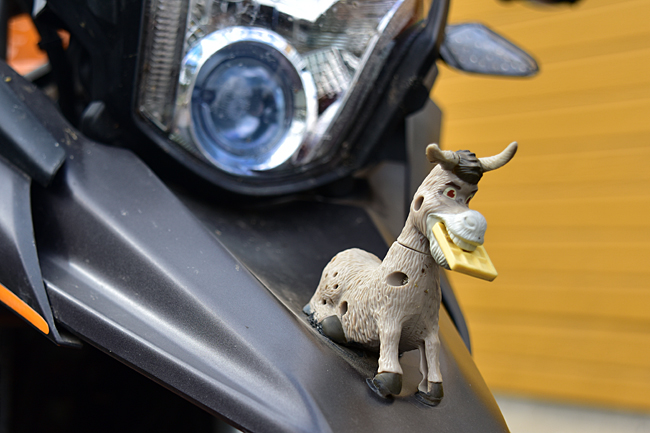 One of the guys asked Rob if his donkey had a name and he said it did not.  I suggested Hoty.    Joe Gresh and Rob both got it immediately.   Get it?  Donkey Hoty?   As in Don Quixote?

Rob had posted on ChinaRiders about a custom set of footpegs he made for his RX3 using bicycle pedals, and I have to tell you, they looked pretty good to me… 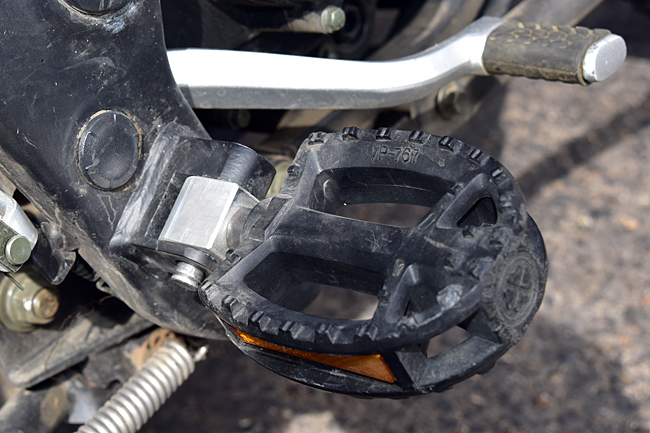 You may remember that yesterday I told you our good buddies Brendan and Shelby (two more RX3 owners) hooked up with us in Boise. 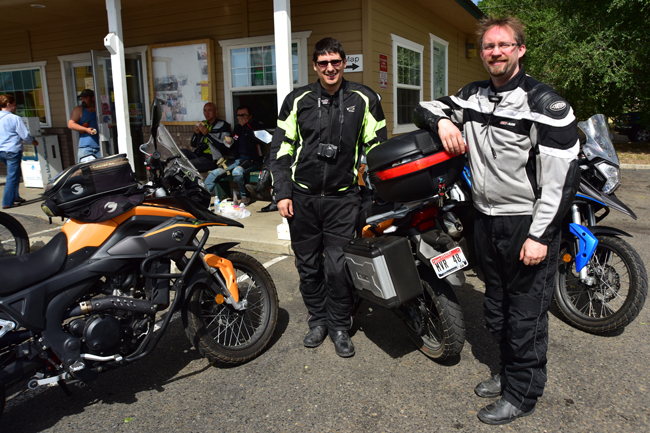 You know, Brendan looks a bit like Tom Cruise.   We talked about that for awhile there in Cambridge.   I told Brendan that people tell me I look like Leonardo di Caprio.   I don’t see it, myself…

Brendan, Shelby, and Rob know Idaho and Oregon well, and they told us it would be at least four hours before we saw any place to eat if we were headed to Hell’s Canyon.  It was already about 10:00, so everybody grabbed something at the gas station in Cambridge. 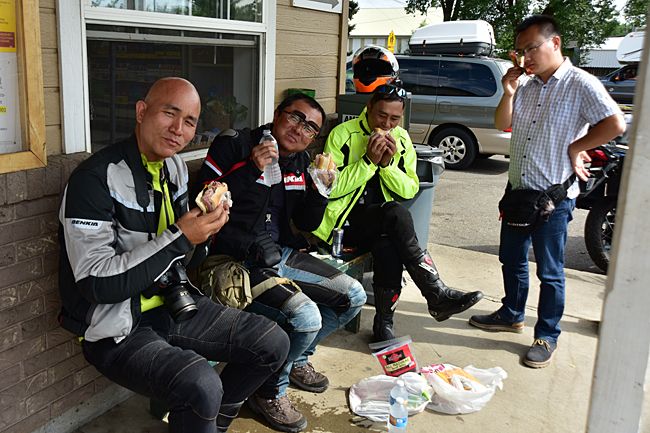 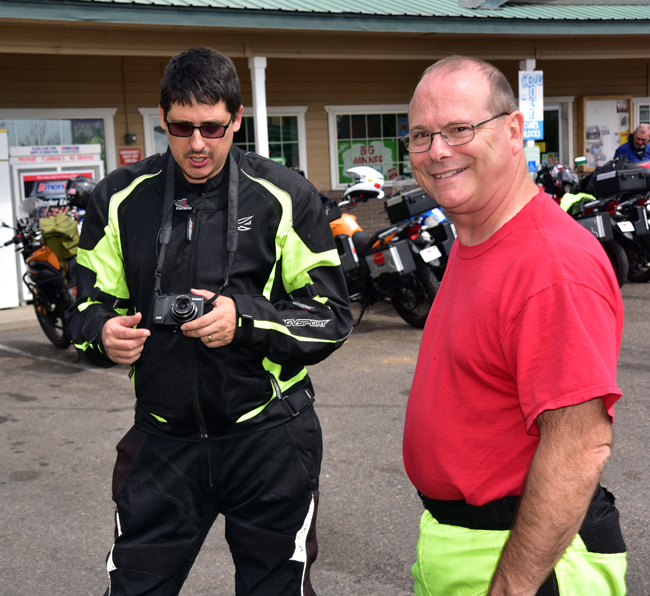 I kept my mouth shut on that one…I’m a Nikon guy.

So, after the sampling the culinary delights of a rural Idaho Sinclair station, we were on the road on Idaho 71.  It’s one of the world’s great roads, folks.   We’ve been on so many amazing roads I’m losing track of them all.   We rode 71 right across the Snake River, and we arrived in Oregon.

Let me say that again.

Okay, you get the point.

Here are a few shots after we crossed into Oregon… 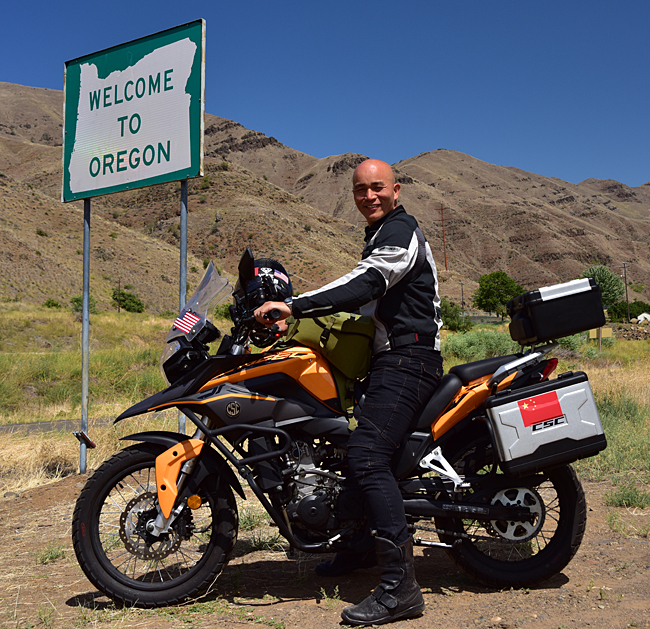 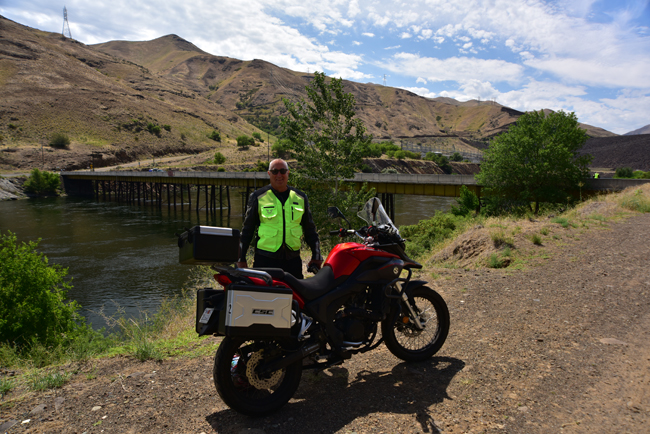 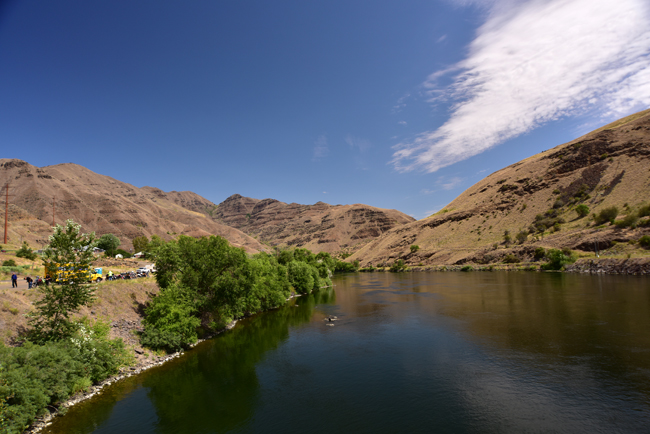 I have to wonder what our Chinese and Colombian friends think of all this.   They must be wondering two things:

Are all the roads in America this magnificent?

Where are all the people?

On this last point, we’ve been in some very desolate and very beautiful areas.   It’s why Baja John chose the routes he did (and he has done one hell of a job in charting our journey).   Joe Gresh made the comment a few days ago…our guests have to be thinking all of America is like this, and they have to be wondering where all the people are.

We visited yet another amazing place today….Hell’s Canyon.

I’d never been to Hell’s Canyon before, and I always wanted to see it.   Hell’s Canyon is deeper than the Grand Canyon.   We were actually looking down on hawks flying below us.  Getting up there was a challenge.   The road was “unimproved” (a fancy way of saying washboard gravel).   I don’t like riding in that kind of stuff, but in for a penny, in for a pound.   It took us a good hour to get up to Hell’s Canyon.  It’s another place I can cross off my bucket list… 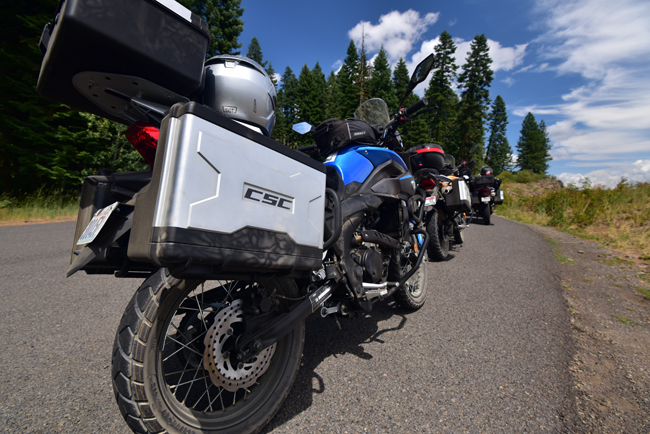 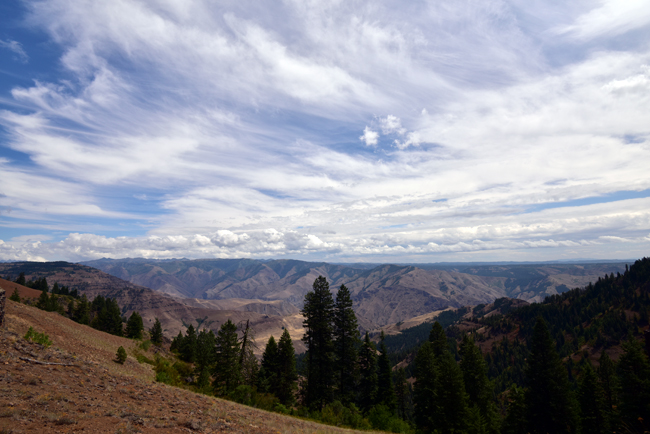 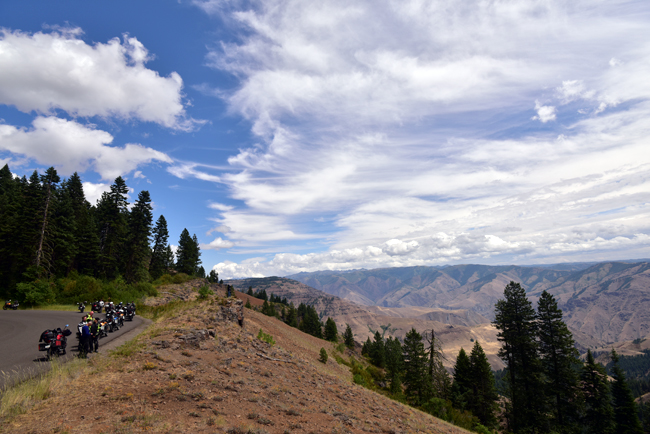 I was having a ton of fun taking in the views and taking photos.  Like always, though, the best photos are the ones of people.

This first one is of Juan Carlos and Gabriel, basking in the glory of Hell’s Canyon… 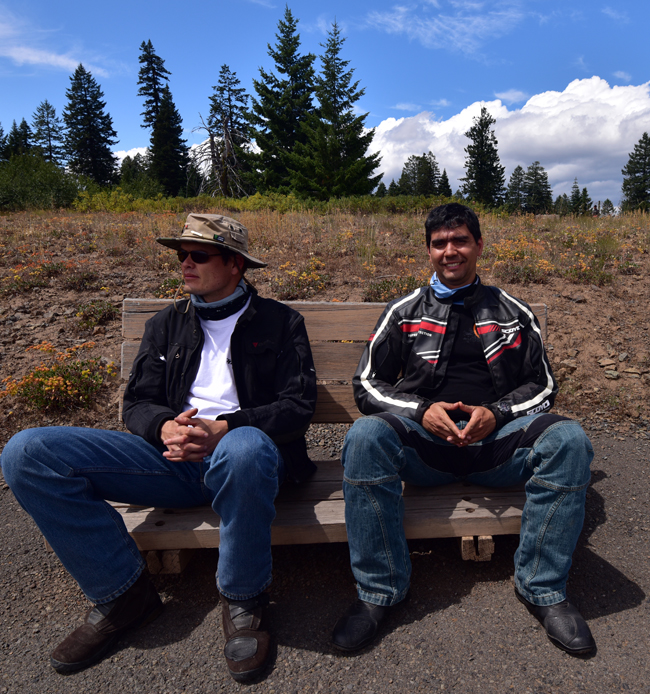 I was using my super wide angle lens.   The guys have been joking with me about its peripheral reach.

One trick with a wide angle lens is to shoot down at people.   Here’s a shot doing just that, showing Rob, Shelby, Tony, Brendan, John, Lester, and Joe… 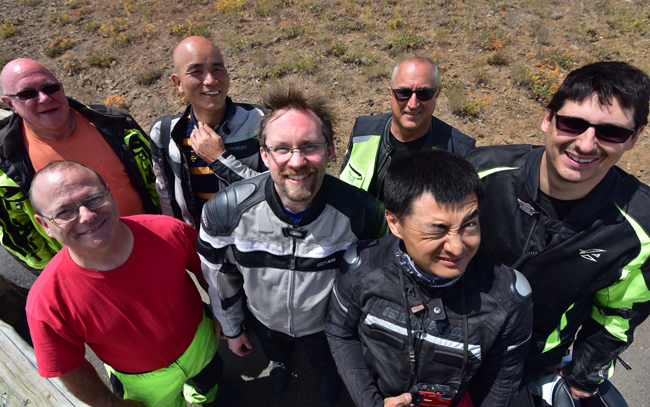 After taking it all in, it was time to get on the road again.   We still had another 120 miles to our destination for tonight.  Folks, it was a long 120 miles.  The ride west out of the Hell’s Canyon overlook took forever.   Imagine Glendora Ridge Road (unending switchbacks and unmarked lanes) extending for nearly 80 miles in very cold riding conditions.

I was sure glad when we reached the small town of Joseph at the end of the switchbacks.   That’s the name of the town.  It’s named for Chief Joseph of the Nez Perce Indians.  I told our guests it was named for me.   I think one or two of them believed me.   I don’t know if they have fully gotten a register on my sense of humor yet.    Maybe.

We had a great Mexican lunch in Joseph, and then we rode another 71 miles to La Grande, Oregon, which is where we are now.

When we arrived at the hotel this evening, we were in for another nice surprise.   Our good buddy Mark (who owns a red RX3) was waiting for us! 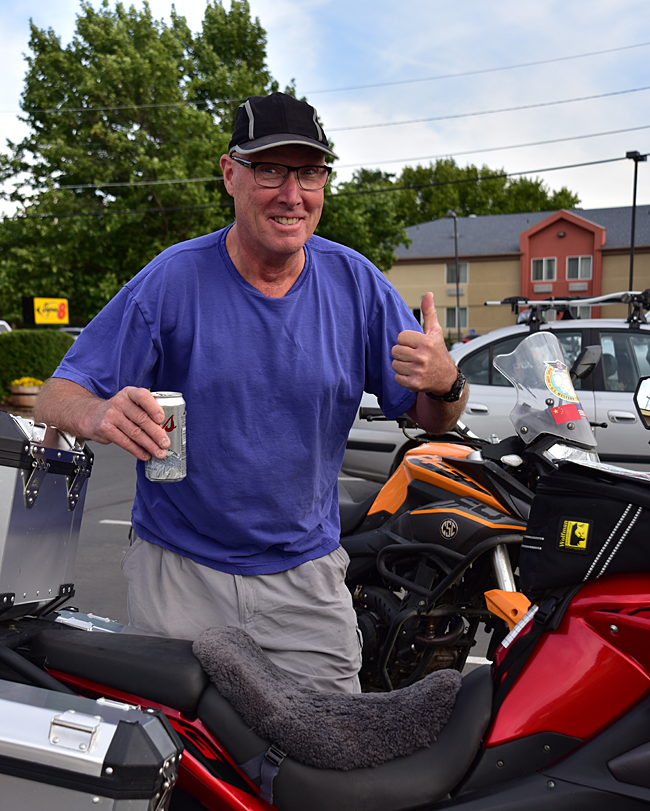 We were very tired when we pulled into the hotel parking lot, but listening to Mark talk about how much fun he was having with his RX3 was invigorating.  Joe Gresh listened in amazement.   Joe turned to me and jokingly asked “You’re paying him to say this, right?”  But I could tell he was impressed.   Joe is loving the RX3 he’s riding on this trip.   He’s becoming a member of the Cult of the Zong.

I’m calling it a night.   It was a long day, and I need to get a good night’s sleep.  We’re doing another 270 miles tomorrow, but unlike most days on this expedition, they’ll be mostly freeway miles.   We’ll be spending tomorrow night in Beaverton, just south of Portland, and you’ll be able to find us at the Peppertree Inn at 10720 SW Allen Boulevard.

And allow me to add just one more photo, updated to show where we are now… 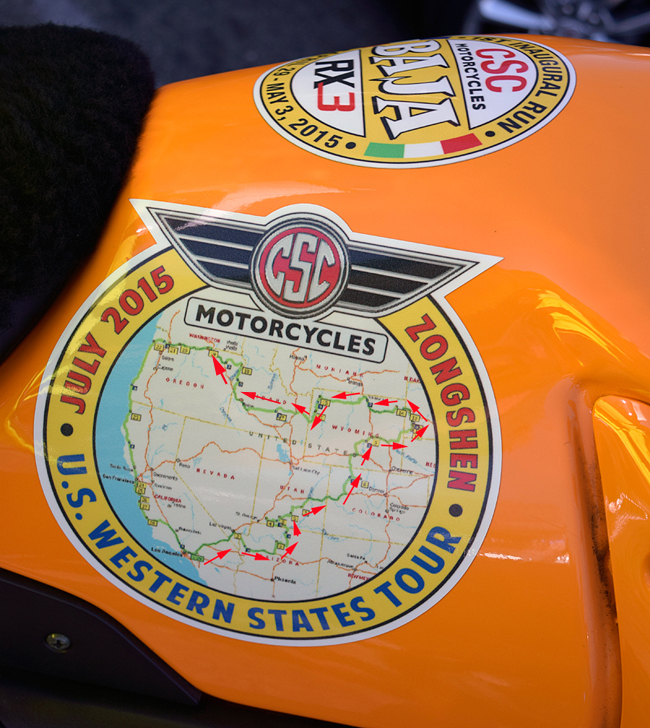 Take a good look at that photo.  We did that on 250cc motorcycles.    Oregon.   Amazing stuff, my friends.